This review was originally published to the Pizza Hut listing on Google Maps, however later removed from being visible to the public, first expected to be a result of the fact I included screenshots to give a timeline of evidence of what was being stated as happening, later finding out that even if I removed the screenshots & photo or attempted to delete & resubmit the same review, I still couldn't get the review republished, so I made it a priority to get this review republished here as quickly as possible so it would still be findable through search engines.  This version of the review will read better anyways, as the images were not loading correctly on Google Maps, where they will load correctly here & allow for better formatting including the images in the correct order with the text.

The images that were previously submitted to Google Maps have been transferred here for viewing, these will later be added into the review itself so they can also be indexed & found in search engines.

On 11/13/2021, I ordered the BOOK IT! Bundle, which cost me $37.85 total (including tax, delivery fees & tip). The Pizza Hut app has an issue with crashing on Samsung Galaxy S9s, so I had to take a couple attempts to get the order to go through (not being able to get an order to go through since 9/14/2021); additionally, I had to do a future order, I couldn't complete the order otherwise (an order that wasn't in the future).

The order was almost an hour late, not hot (lukewarm at best) and missing the breadsticks & extra sauce. The DoorDash person stated they had delivered 3 order from this Pizza Hut that same night, every one of them got screwed in one way or another (their statements before I even said anything giving indication that something was was probably going to be wrong).

I called the Pizza Hut after I brought the pizzas in the house, it wasn't too long before they picked up to take a "new order"; I stated it was an order that was just delivered missing items, they put me on hold when I asked if they were going to provide a partial refund for missing items (or if I needed to go through my bank to get this resolved, meaning reversing the charge), never getting back to me even after being on hold for over an hour & 10 minutes (hanging up at 10 PM, taking a screenshot from my phone before ending the call).

I then made a call to my bank to discuss the issue & ask if anything could be done about the undelivered items.  At first I was expecting I would have to fully reverse the entire charge (one of the reasons I hadn't eaten any of the pizza prior to speaking to the bank, as I expected I would have to throw away or return the entire pizza), they stated that I could however dispute a portion of the charge for undelivered items.  I estimated roughly $5 (looking at the full price of $6.74 for an order of breadsticks & an extra sauce) seeing as I was paying for a bundle & not for the order at full price, unfortunately it wasn't until later that I realized that this would have lowered the tip & was wishing I had given a higher am amount to dispute to my bank (considering the charge from Pizza Hut is still pending, I may call them back about this later).

It wasn't until 11/15/2021 when I was speaking to a therapist over a webmeeting appointment that I realized that my review had been hidden from the public, at which point I started making it a point to get the old review transferred over here so that it could still be found in search engines, expecting to later submit a review to the Better Business Bureau as well.  This delisting of the review showed the first signs of retaliation to the disputed opened with my bank regarding lowering what was paid towards the order on what wasn't delivered (and publication of their attempt to avoid having to do anything about it by putting me on hold & never picking the call back up); the fact that Google allowed this to happened this also adds another situation of revictimization in response to abuse from offending companies that had negative review written against them (which will result in another review on Google being published later).  As I looked at my published reviews through a private browser, I noticed that 2 others reviews were also being hidden (16 reviews submitted, but only 13 being made public), so those will have to be republished as well...  Unfortunately with the hiding of the review from Google Maps making my statement to my bank that they should include the review from Google Maps in their report/dispute, this invalidates that statement & I will probably need to contact them back giving them the address to this new review published to replace the previously hidden review on Google Maps...

UPDATE:  Shortly after getting this review published on here, I deleted & resubmitted my review on Google Maps to show that it had been moved in response to hiding it from the public as a result of retaliation from the company.  Surprisingly, I did see it for a quick moment when I verified it's public presence through a private browser, however it was unsurprisingly hidden again in a matter of seconds after being submitted, so I decided another update to this review was necessary, along with a screenshot of the review that was hidden on Google Maps. 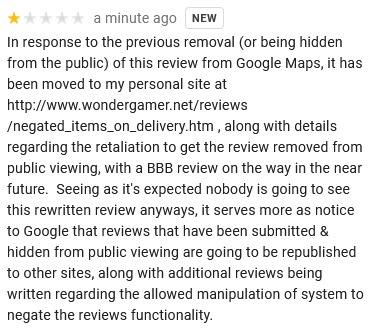 I later changed this to only include the website (not the specific address to this page itself) & later removed the details about it "being a notice to Google" after verifying it was showing when I removed the address to this page, however it's expected it will again be hidden from the public, so just more details to be published when that time comes on further retaliation from Pizza Hut.

More updates to this review are expected as further retaliation is expected to happen & I'm still watching to see what happens with the disputed opened with my bank, updates will be added as I acquire those new details